December, like no other month of the year, abounds in old, traditional customs that have been cultivated for generations, though of course some of them not only in our country. In the first days of December, on December 4 to be exact, it is St. Barbara, who is the patron saint of miners. On this day, early in the morning, ceremonial parades of mining orchestras take place in cities where mines are located in Poland (e.g. in Upper Silesia). Considering the fact that this day is also sometimes on weekends, residents of these cities must expect an early wake 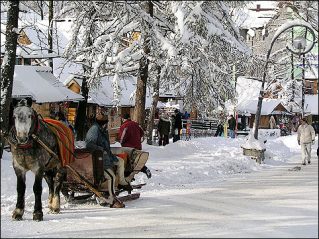 up (even at 6:00 am), which will be organized for them by an orchestra dressed in mining clothes, including hats with red feathers. Another element of celebrating St. Barbara among the miners is the so-called “Beer Tavern”, which is usually evening meetings of all miners working in one mine, regardless of their position.
An important element of such an event are the performances of the invited artistic groups, e.g. cabaret groups, and tasting the specialties of Silesian cuisine, i.e. roulades, Silesian noodles and red cabbage. Of course, the whole thing must be thoroughly helped with beer – preferably with the beer from the nearby Tychy brewery.

Just two days after December 4, another important date falls on the December calendar – St. Nicholas. This is already a concrete preview of the upcoming Christmas, which of course the children are waiting for the most. On that day, the youngest are visited by Saint Nicholas at home, as well as in kindergartens and schools. In Poland, depending on the region, it sometimes happens that this saint brings gifts only on Christmas Day, or on December 6, he brings only small, small gifts, e.g. sweets and fruit. It even happens that naughty children are brought small pieces of coal or potato peel … But I don’t remember ever getting anything like that 🙂

However, as I wrote above, St. Santa sometimes likes to be late and doesn’t come around until Christmas Day. Then, however, depending on the region of Poland, he or she may meet a different character giving gifts to good children. For example, in Upper Silesia it is the Baby, that is, the little, newly born Lord Jesus, in other regions (in western and northern Poland) gifts are brought by Gwiazdor – (Star Lord), and in Southern Poland it is an Angel. On the other hand, in the east of Poland gifts can be brought by Grandfather Frost, otherwise more popular in Russia as “Died Moroz” – Old Man Frost. It does not matter who is bringing it, but it is important to find something under the Christmas tree, of course, which we wish you warmly 🙂 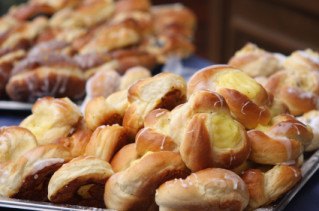 Holidays are also a time of feasting together and tasting traditional dishes. The most famous are those served during the Christmas Eve supper on December 24. Here, too, we can notice differences between regions of Poland, but it is

important that there are exactly 12 of these dishes. The tastiest of them are: Christmas Eve borscht with dumplings, mushroom soup, dumplings with cabbage and mushrooms, cabbage with peas or mushrooms, fried or jelly carp,  Greek-style fish, herring in cream or oil, noodles with poppy seeds, poppy seed cake, old Polish gingerbread, dried compote, kutia. Traditionally, meat dishes should not appear (except for fish), but in recent years this tradition has changed and in some families meat appears on Christmas Eve, which I consider an exaggeration, since the next two holidays (December 25 and 26 are holidays in Poland) we spend mainly on … eating mainly meat dishes.

Other Christmas Eve customs include leaving one free seat at the table (for a person who would suddenly be able to knock on us, then we cannot refuse a meal). Others explain this practice in a different way – it is supposed to be a place for a person who has died in our family recently. In addition, there should be at least a small amount of hay on the table or under it, commemorating the fact of the birth of Jesus in a stable, some people also hide bills under their plates, so that the next year they will not run out of their wallet or family. According to some, keeping in the wallet one shell from a carp, which we ate during the Christmas Eve supper, is the same. 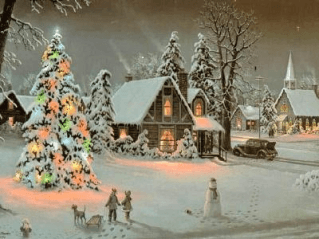 Then the obligatory “Pasterka” – that is, the Mass of the Nativity of Jesus, celebrated in the evening or at midnight on December 24, and caroling at home or in the church on the following days, and it may take a long time because in Poland there are over 500 Christmas carols and pastoral churches lasts even until February 2, that is, until the Presentation of the Lord. Of course, the whole celebration takes place at the Christmas tree, dressed a few days before Christmas by the household. Unfortunately, we can see it much earlier (even at the beginning of November !!!) in many stores and shop windows. This is an exaggeration in my opinion.

However, it is important that it is ready by the evening of December 24, because only there you can find Christmas gifts, which we wish you with all our hearts, together with better than this current New Year, health and many planned or postponed trips around the world !!!